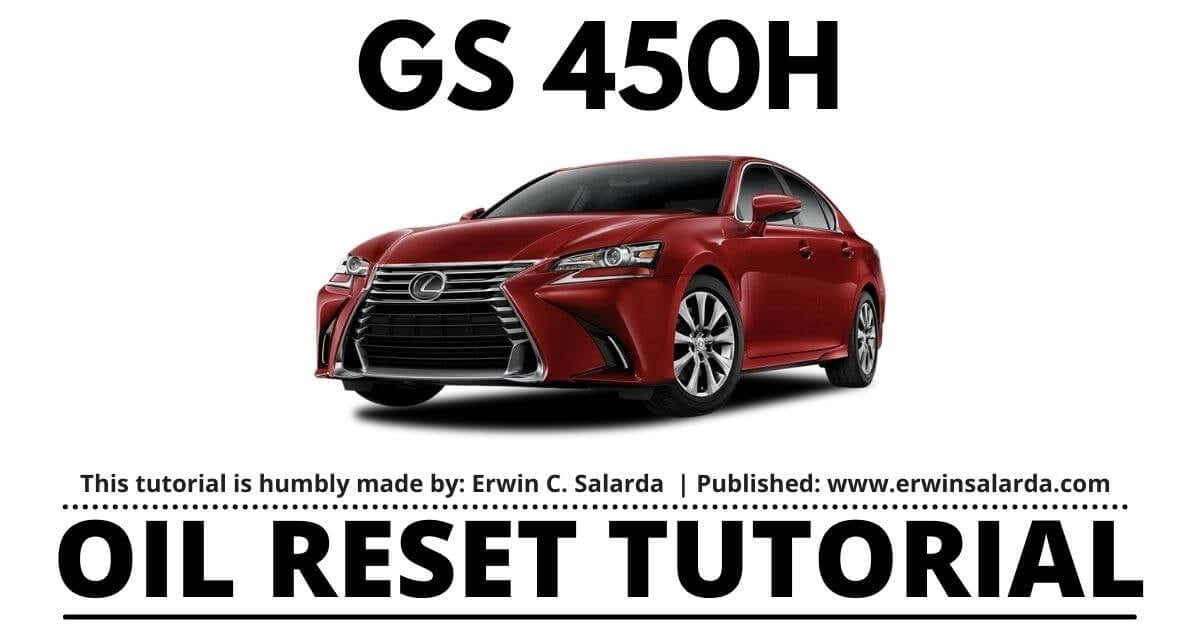 IF THE ABOVE TUTORIAL IS NOT APPLICABLE TO YOUR CAR MODEL. PLEASE FOLLOW THE TUTORIAL BELOW.

Unveiled at the 2005 New York International Auto Show, the hybrid GS 450h (GWS191) joined the GS line in 2006 for the 2007 model year. GS Hybrid production started in February 2006.It was the first mass-production rear-wheel drive luxury hybrid car, featuring the naturally aspirated 3.5-liter 2GR-FXE V6 engine mated to an electric motor and a continuously variable transmission (CVT). This powertrain made use of the Lexus Hybrid Drive system of integrating electric and gasoline engine motors, giving the GS 450h a Super Ultra Low Emissions Vehicle (SULEV) emissions rating, and total output of 253 kW (339 hp),allowing the GS to accelerate 0–60 mph (0–97 km/h) in 5.2 seconds, according to manufacturer data.

New to the GS line was an electric power steering (EPS) system, and both the V8 and hybrid models featured a variable gear ratio steering (VGRS) system and Electronically Controlled Brake (ECB) a type of brake-by-wire system. V8 and hybrid models also featured an adaptive suspension system that individually altered suspension damper firmness. Vehicle Dynamics Integrated Management (VDIM) was standard on the GS 430, 460, and 450h models and coupled to VGRS, with which it could alter steering gear ratios

Standard safety features on the GS ranged from multiple airbags, including knee airbags and front row side torso airbags, to adaptive headlights, anti-lock braking, electronic brakeforce distribution, brake assist and electronic stability control. The radar-based pre-collision system with an autonomous cruise control system was optional. The GS 450h was among the first vehicles to receive the infrared Driver Monitoring System for driver attentiveness. For the 2007 model year, the GS 350 replaced the GS 300 in the US and several other export markets.

Along with the hybrid GS 450h and previous GS 430 models, the V8-powered GS 460 offered the Active Stabilizer Suspension System for improved handling. The GS 450h retains its position as the most expensive in the GS lineup, and has faster acceleration than the GS 460, though the GS 460 is lighter and has a higher top speed. In 2010, the GS was outsold nearly two to one by the flagship LS.

The GS 450h (GWL10), rated at 256 kW (343 hp) and now using an Atkinson cycle design, has a 35 percent improvement in fuel economy over the previous generation GS 450h, and has a higher combined EPA fuel efficiency rating (31 mpg) than the 306 horsepower GS 350 (23 mpg). Trunk space is improved both for the hybrid and standard models. The GS 450h features standard full LED headlamps and a bamboo trimmed interior. The vehicle was unveiled at the 2011 Frankfurt Motor Show.

In 2006, Sigma Advanced Racing Development and Lexus entered a GS 450h performance hybrid sedan in the 24 Hours of Tokachi race in Hokkaido, Japan, the first time that a hybrid vehicle was introduced.In 2007, Lexus Canada also entered the GS 450h in the Targa Newfoundland event. In 2009, the GS 450h was used as a safety car at the Muscle Car Masters event held at Eastern Creek Raceway, Eastern Creek, New South Wales, Australia. (source:wiki)