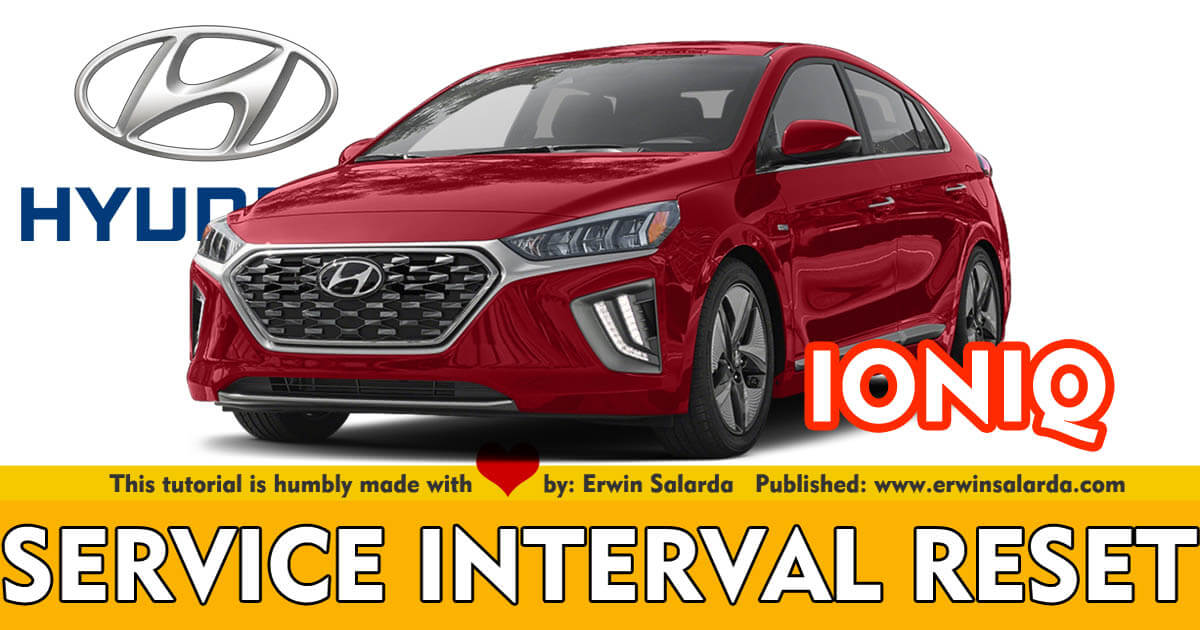 Tutorial on how to reset the service required reminder indicator message spanner/wrench light on Hyundai Ioniq from the year 2016-2017-2018-2019-2020.

YOU CAN ALSO RESET THE SERVICE INTERVAL BY FOLLOWING THE TUTORIAL BELOW.

e Hyundai Ioniq is a compact five door liftback manufactured and marketed by Hyundai.The nameplate Ioniq is a portmanteau of ion and unique. It is the second automobile, after the Volkswagen Golf, to be offered in hybrid, plug-in hybrid, and all-electric variants.

The Ioniq Hybrid debuted in South Korea in January 2016, with all three variants debuting at 2016 Geneva and New York auto shows. The hybrid variant launched in its home market in February 2016, followed by the electric model in July 2016. The plug-in hybrid version followed in February 2017.

From its first model year (2017) through the 2019 model year, the Ioniq Electric had been the EPA’s most efficient vehicle with a rated fuel economy of 136 miles per gallon gasoline equivalent (mpg-e) (1.7 L/100 km). The Ioniq Blue hybrid version has been rated at 58 miles per gallon, making it the most fuel efficient hybrid vehicle that is mass produced.

The Ioniq is Hyundai’s first automobile built from the ground up and specifically available as a hybrid or electric powered.

The hybrid version competes with, and surpasses in fuel economy, the previous mileage leader in the Toyota Prius. Sharing the same powertrain with the Kia Niro hybrid crossover, the Ioniq is powered by a 1.6 litre Kappa four cylinder Atkinson-cycle engine with 40% thermal efficiency capable of delivering 78 kW (105 hp) and an estimated 109 lb⋅ft (148 N⋅m) of torque alone.

The battery is positioned under the rear passenger seats. In combination with the 1.6 litre direct injection engine, the Ioniq Hybrid offers an estimated total system output of 139 bhp (104 kW) and 195 lb⋅ft (264 N⋅m). This engine is combined with a shifting six speed dual-clutch transmission.Like many hybrids and electric cars, neither the Ioniq Hybrid nor Electric are suitable for towing a trailer.

The Hyundai Ioniq Electric is a mid-2010s limited-production all-electric version of the Ioniq that is sold only in select countries and US states. It features a 28 kWh lithium-ion polymer battery (LiPo) that delivers an EPA-rated all-electric range of 124 mi (200 km). Hyundai originally expected the Ioniq to deliver a range of 110 mi (180 km).

The charging plug of the car is located in a position where gas fillers are normally located.The Ioniq features paddle shifters to allow drivers to choose from one of four levels of regenerative braking. As of 2019, Hyundai USA sells the Ioniq Electric only in select states. It is sold by Hyundai in other countries as well, which as of December 2018 included Canada, Norway, Netherlands, Portugal or Switzerland.As of 2020, the car remains listed on the Hyundai website.

By January 2018, the Ioniq had surpassed 106,300 units sold worldwide, including over 73,800 conventional hybrids and nearly 25,000 purely electric cars, as well as over 5,500 plug-in hybrid variants (which had been on sale for three months).(source:wiki)