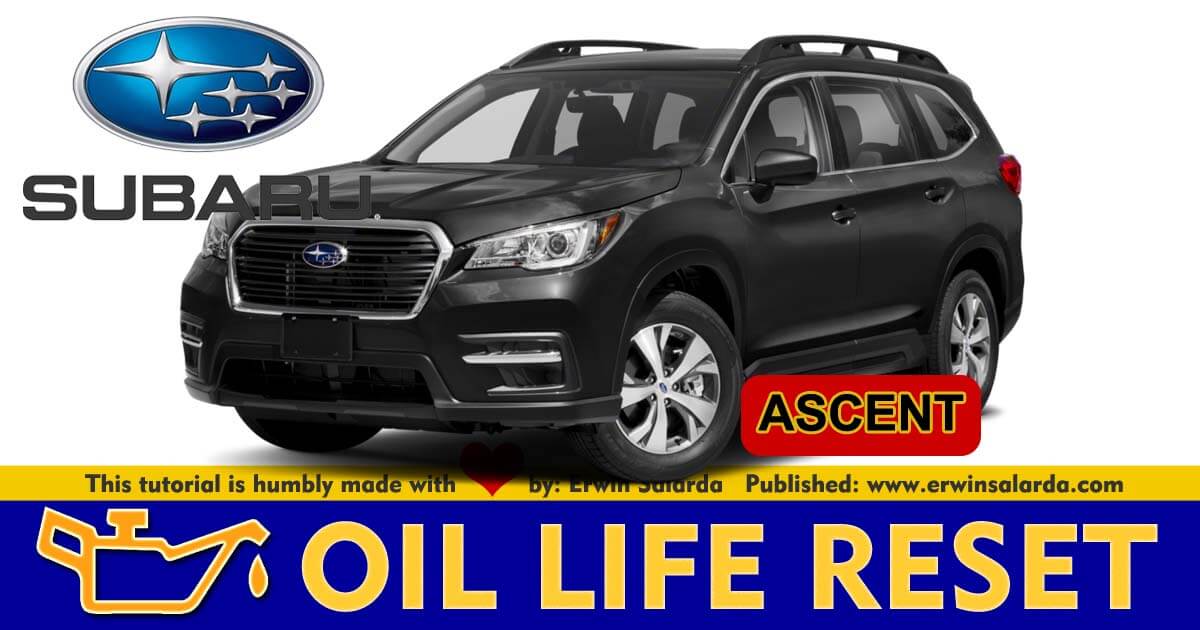 Easy and simple tutorial with an image guide on how to reset the oil change service maintenance reminder indicator light on Subaru Ascent from the year 2018-2019-2020.

The Subaru Ascent is a mid-size crossover SUV made by Subaru. It is the largest automobile Subaru manufactures. The seven or eight-seat passenger SUV, with the design based on the VIZIV-7 concept, made its debut at the LA Auto Show on November 28, 2017. The Ascent became available in the third quarter of 2018.

The Ascent was originally introduced as a concept car at the 2017 New York International Auto Show in April, where it was also announced that Subaru would be producing the vehicle at its Lafayette, Indiana Subaru of Indiana Assembly Plant. Production began in early 2018 alongside the current Subaru Impreza.It will be the flagship Subaru vehicle in North America, and will replace the Subaru Tribeca (previously the B9 Tribeca), which was discontinued after the 2014 model year. Subaru Japan had their own three-row crossover called the Subaru Exiga that was available from 2008 until its discontinuation in 2018. In terms of exterior design, it was akin to a 3 row Outback as is the Ascent to the Forester.

The first spy photographs of Subaru Ascent development mules surfaced in late summer 2016. Although the Ascent was again spotted testing in 2017 with an expected mid-2017 on-market date, the current expected on-sale date is early summer 2018.
The production Ascent is a seven- or eight-passenger, mid-size sport utility vehicle. The all-new Ascent is built on the Subaru Global Architecture (SGA) Platform, which previously underpinned only the fifth-generation Subaru Impreza. Powering the Ascent is a 2.4-liter turbocharged boxer four-cylinder (H4) gasoline engine, which produces 260 horsepower (190 kW) and 277 pound-feet (376 N⋅m) of torque. All Ascent models will feature All Wheel Drive with “X-Mode” as standard equipment, as well as Subaru EyeSight driver assistance technologies. The U.S. starting base price is $31,995, ranging up to $44,695 for the Touring trim level.

With both rows of rear seats folded down, the Ascent has a total cargo capacity of 86.5 cubic feet (2.45 m3), and 153.5 cubic feet (4.35 m3) of total passenger volume. Ground clearance is 8.7 inches (220 mm). There are a total of nineteen cup holders in the vehicle.
Subaru has released full specifications for the Ascent as well as a list of select standard equipment for each trim level:

The Ascent Premium is the mid-level trim of the Ascent. It adds a choice of either seven or eight-passenger seating by deleting the second-row bench seat in favor of individual captain’s chairs, a 5,000-pound (2,300 kg) maximum towing capacity, Subaru STARLINK safety and security features with mobile Wi-Fi capabilities, spill-resistant cloth seating surfaces, blind spot detection (BLIS) with rear cross-path detection, and the All-Weather Package with heated front seats.

In August 2018, Subaru recalled (at least) 293 vehicles that were thought to have faulty spot welds. Due to the complexity of fixing such a problem, the company said it would instead provide owners with new vehicles. Most were still in dealer inventory; only nine had been sold. However, after physical inspection all 293 vehicles were correctly welded and cleared for service. (source:wiki)