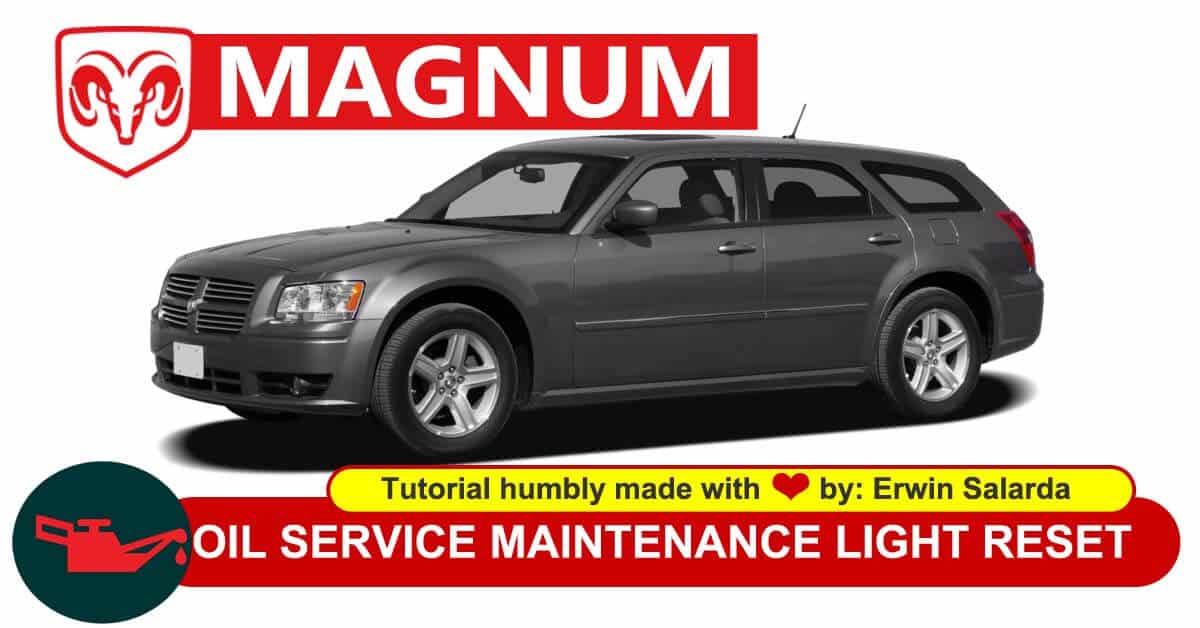 Step by steps tutorial on how to reset the oil change service maintenance reminder indicator light of Dodge Magnum from the year 2005-2006-2007-2008.

The Dodge Magnum is a nameplate used by several Dodge vehicles, at different times and on various markets. The name was first applied to a large Chrysler B platform-based 2-door coupe marketed from 1978 to 1979 sold in the United States and Canada. From the 2005 to the 2008 model years, the nameplate was revived for a station wagon on the rear-wheel drive Chrysler LX platform, produced in Canada and sold on the American and Canadian market.

In Brazil, the Magnum was a top of the line version of the local Dodge Dart, produced from 1979 to 1981.

In Mexico, the Dodge Magnum was a sporty rear-wheel drive two-door car based on Chrysler’s M-body (American Dodge Diplomat/Plymouth Gran Fury). From 1983 to 1988 Dodge marketed a sporty two-door K-car as the “Magnum”, with an available turbocharger engine from 1984 on.

The Magnum name was revived in 2004 for the 2005 model year, as a station wagon based on the Chrysler LX platform. The new Magnum was a badge engineered station wagon version of the Chrysler 300 manufactured at the same plant in Brampton, Ontario, Canada. The Magnum had four engine options; the SE features the 190 hp 2.72 L LH V6, the SXT had the 250 hp (190 kW) 3.5 L V6, and the RT had the new 340 hp 5.7 L Hemi V8. The SRT-8 has a 425 hp 6.1 L Hemi engine. All-wheel drive became an option in 2005 on SXT and RT models. The SRT8, AWD SXT, and the RT use a Mercedes-Benz-derived 5-speed automatic transmission, while all other models use a four-speed automatic. The Magnum was built at the Brampton Assembly Plant, near Toronto, Ontario, Canada, from 2004 to the end of model year 2008. (source:wiki)