10 Things You Should Know About MAF Sensors 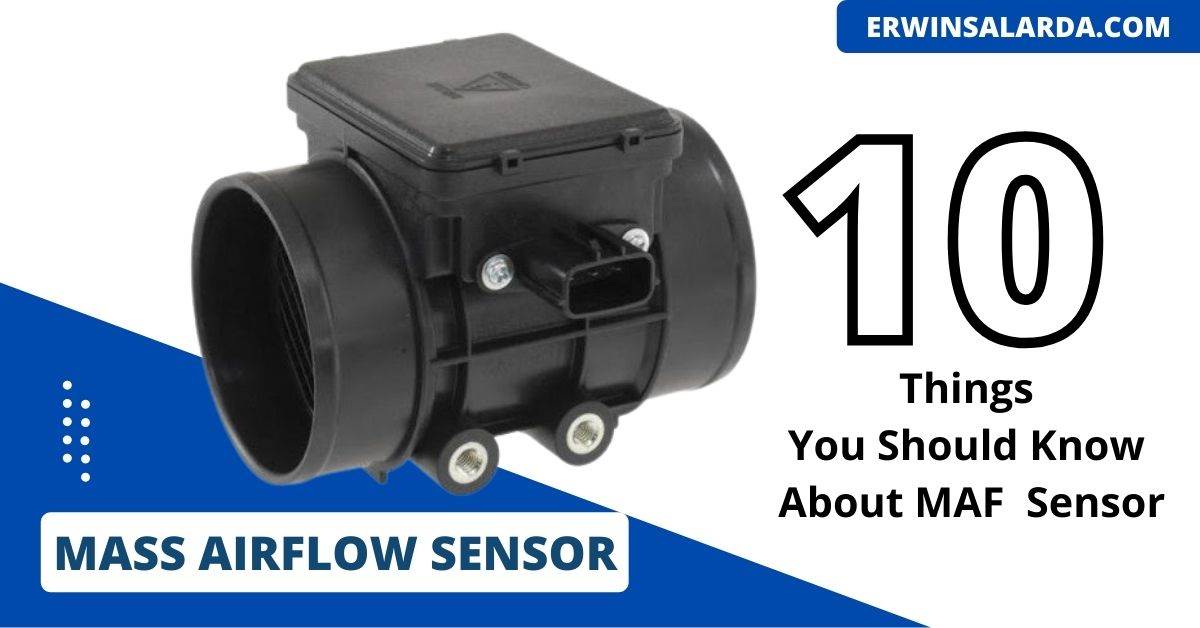 10 Things You Should Know About MAF Mass Airflow Sensors

I’m doing additional study on the MAF sensor. Gather all of the pertinent information regarding this automobile sensor. This tutorial will teach us a lot. I hope this tutorial was useful to you.

The engine control unit (ECU) needs the air mass information to balance and supply the proper fuel mass to the engine. Temperature and pressure affect the density of air. Air density changes with ambient temperature, altitude, and the usage of forced induction in automotive applications, thus mass flow sensors are better than volumetric flow sensors for measuring the amount of intake air in each cylinder.

On automobile engines, there are two types of mass airflow sensors in use. The vane meter and the hot wire are these. Neither design makes use of technology that directly monitors air mass. An engine’s ECU, on the other hand, may calculate the mass flow rate of intake air using extra sensors and inputs.

3.) How does a MAF sensor function?

Most MAF sensors operate on the hot wire concept and are installed in the intake pipe between the air filter housing and the intake manifold. In a nutshell, a MAF has two sensor wires. The first is heated by an electrical current, while the second is not. The heated wire cools as air travels across it. When the temperature differential between the two sensing wires varies, the MAF sensor adjusts the current to the heated wire automatically to compensate. The current is then converted to a frequency or a voltage and transferred to the ECU, where it is read as air flow. The amount of air that enters the engine is changed accordingly.

There are some disadvantages to using a vane meter Airflow Sensor:

The mass of air flowing into the engine’s air intake system is determined using a hot wire mass airflow sensor. The hot wire mass airflow sensor operates on the same principles as the hot wire anemometer (which determines air velocity). This is accomplished by providing a continuous voltage to a wire hung in the engine’s air stream, similar to a toaster wire. According to Ohm’s law, the electrical resistance of a wire increases as its temperature rises, causing the electrical current flowing through the circuit to vary. Because the supply voltage is constant, as air travels through the wire, it cools, lowering its resistance and allowing more current to flow through the circuit. As more current passes through the wire, the temperature rises until the resistance returns to equilibrium. The rise or decrease in current is proportional to the mass of air passing through the wire. The proportional measurement is converted by the integrated electronic circuit into a proportional voltage, which is then transmitted to the ECU. 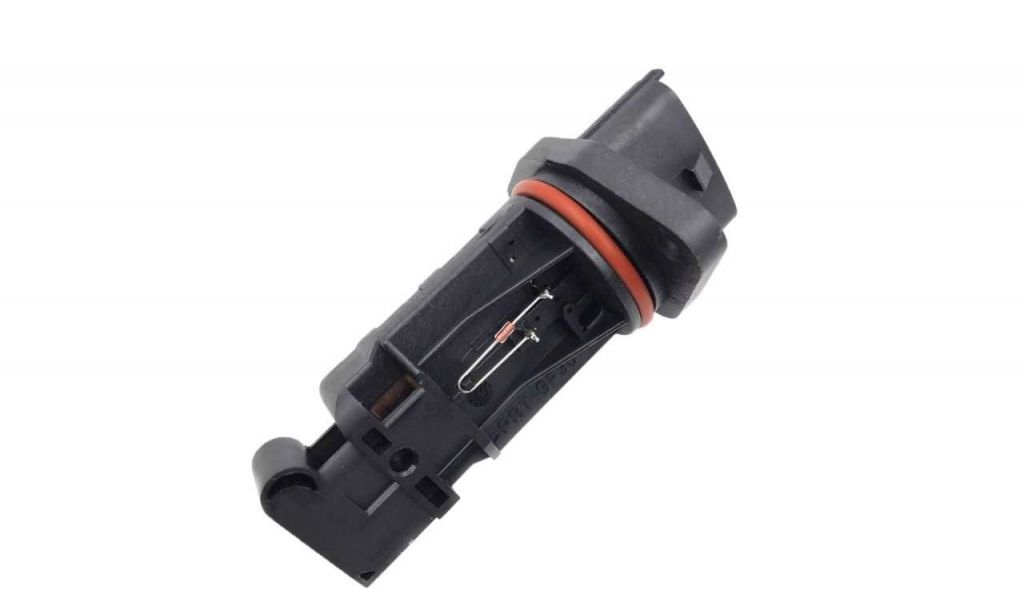 The following are some of the advantages of a hot-wire MAF over an earlier design vane meter:

There are various disadvantages:

4.) How To Test The MASS AIRFLOW SENSOR

Visual, circuit, and component inspections are performed to determine the condition of the MAF sensor. The MAF sensor path must be clean of dirt in order for it to function correctly. If the channel is clogged, the engine will typically start but will run badly or stall, and a diagnostic trouble code (DTC) will displayed.

During MAF sensor troubleshooting, the following procedures should be followed:

• Inspect the connection for proper fit and good contact.

• Inspect the MAF sensor for wear and tear.

• Inspect the measurement components for wear and tear.

• Test the voltage supply when the ignition is turned on (circuit diagram for pin assignment is necessary). 7.5-14V is the ref. value.

• While the engine is operating, measure the output voltage (circuit diagram for pin assignment is necessary). 0-5V is the reference voltage.

• Inspect the transmission wires between the removed control unit connector and the sensor connector (circuit diagram for pin assignment necessary). The reference value is about 0 ohm.

• Use the engine management control unit to perform an electronic test on the MAF sensor. If a problem occurs, a fault code is recorded in the control unit and may be retrieved with the help of a diagnostics unit. 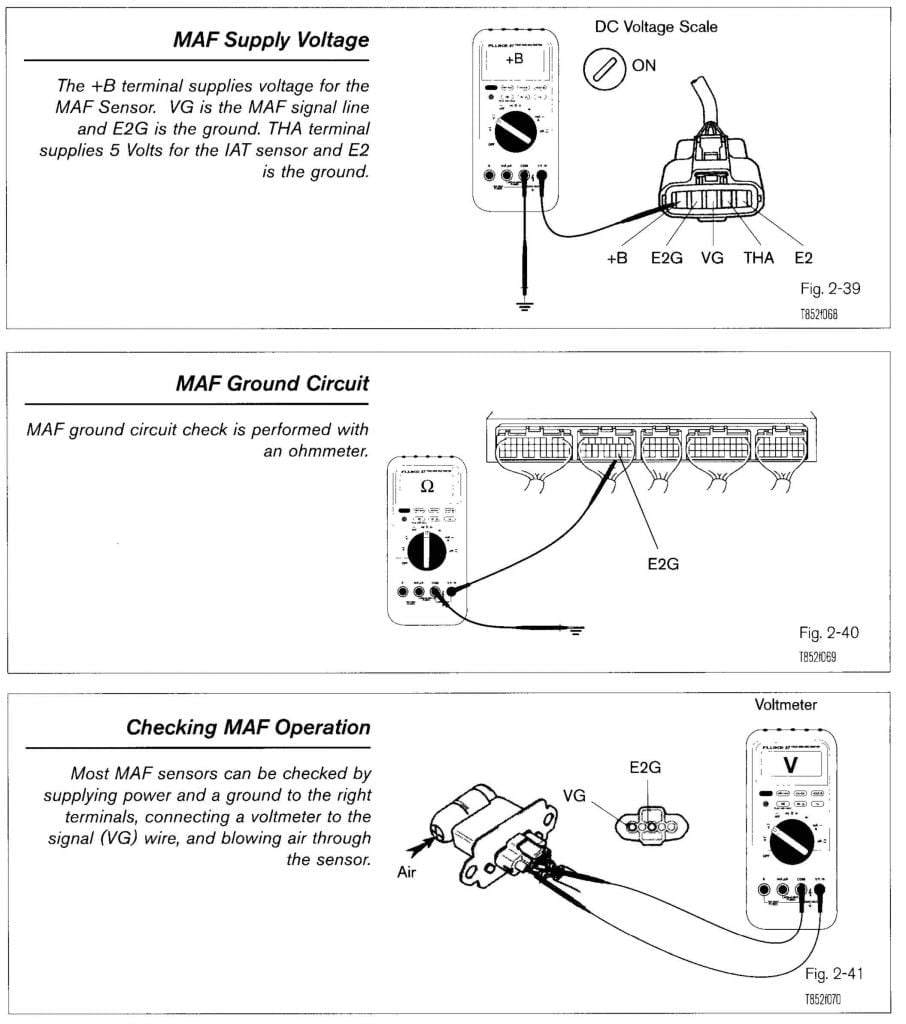 MAF sensors, which are positioned between the air filter and the throttle body, measure the amount of air entering the engine.

6.) What causes MAF sensors to fail?

They have a lot of air moving through them since the MAF sensor is in charge of monitoring air flow into the engine. In fact, for every liter of fuel used, more than 9000 liters of air can travel through the engine. That’s a lot of oxygen! As a result, there is a high risk of contamination. Dust, dirt, and other debris can all get inside the sensor and are a leading cause of MAF failure.

Depending on the vehicle model, contamination could develop as early as 18,000-25,000 kilometers. On small or compact cars, for example, the MAF sensor can clog faster because it is located in a smaller engine compartment that is more vulnerable in vital locations (oil vapor flows and combustion debris). A replacement becomes the equivalent of a long drain oil service in this situation… it almost becomes a service-style repair.

Other typical failure issues are:

When there is an issue with the mass air flow sensor, the “check engine” or “service engine soon” light on the vehicle’s instrument panel will often come on and glow. When the engine computer detects a problem in one of the components of the emission control system, these lights will illuminate on the dashboard.

8.) How do you repair a damaged MAF sensor?

Once you’ve determined that the MAF sensor is malfunctioning, do the following easy steps:

10.) How do I reset my mass airflow sensor Trouble Code?

Thank you very much! This tutorial is compile and research by: Erwin Salarda