Your car won’t start when you try to start it. When you turn the key, you only hear a click. What might be going wrong? Your engine might not start for a number of reasons, and it can be frustrating to try to figure out what’s wrong. Sometimes it’s just a dead battery or not enough gas to start the engine, but sometimes it’s a more serious problem. You’ll need to do some troubleshooting to figure out what’s wrong. In this blog, we’ll look at 15 possible reasons why your engine won’t start and give you some information about the cause of the problem. 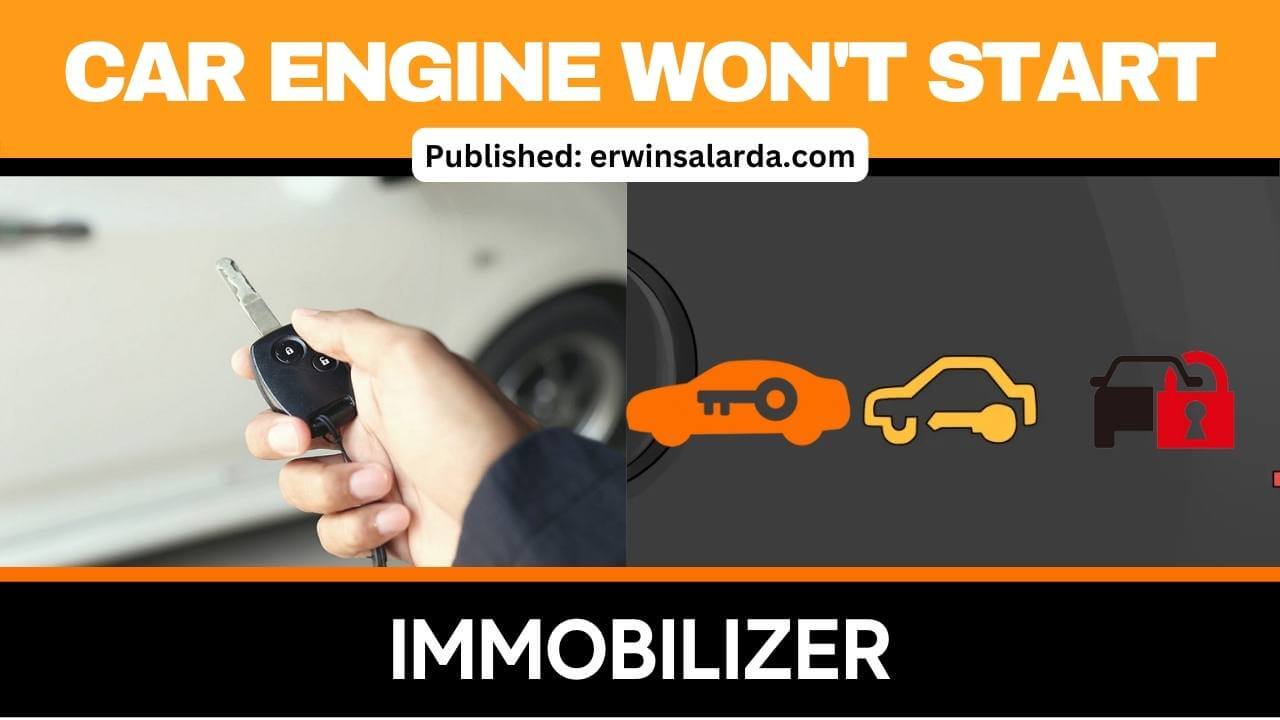 An immobilizer is one of the anti-theft devices that may be fitted in a vehicle to prevent it from moving or being hotwired after it has been stolen. To summarize, a faulty engine immobilizer might render the system inoperable, which means that your car will not start under any circumstances.

A common indicator of an engine immobilizer malfunction is that your vehicle will not start at all. If it weren’t for the immobilizer  issues, there could be a number of reasons why your engine won’t start. Please check the other cause below. 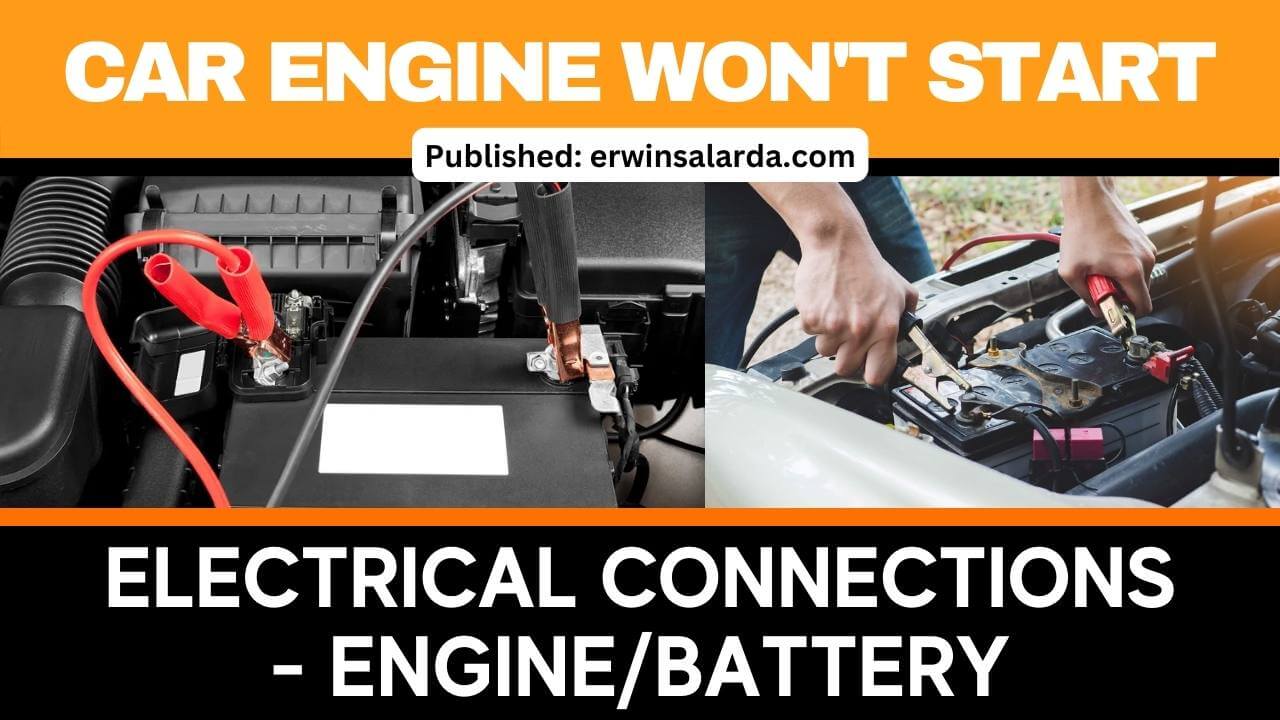 If your vehicle won’t start, the most common causes are a failing or dead battery, loose or corroded connecting cables, a broken alternator, or a problem with the starter. It can be difficult to tell whether you have a battery or alternator problem. Here’s how to figure out which one is at fault.

Symptoms Of A Faulty Battery

If your engine cranks slowly, like it’s tougher to start on cold mornings, starts inconsistently, or the

re’s no sound or interior lights when you try to start, consider a failing battery, a loose or corroded connection, or an electrical draw. A low-power battery with obvious corrosion on the terminals is most likely faulty.

If jumpstarting works, you know you have a battery issue. But you must also determine whether it is basically at the end of its life or whether there are underlying issues. A failed alternator might produce a dead or depleted battery. It can also be caused by extra lights, fuses, sound systems, alarms, and other devices that draw more power.

Symptoms Of A Faulty Alternator

Some things to look for are a car that won’t start or has trouble starting, lights that get dimmer, and problems with the stereo system output. If your car starts but then stops while you’re driving, it’s probably because the alternator isn’t working right. If your engine makes a squealing sound that gets louder when drains like the heater or sound system are on, it could be that your alternator bearings need to be replaced.

Another sign is if the AM radio is turned to a low number without music and the engine is revved. If you hear a whine or a muffled sound when you press the gas pedal, your alternator is likely failing.If the car won’t start but the headlights still work, check the starter or other parts of the engine.

If your car’s check-engine or battery light is on, it could mean that there’s a problem with the charging system. If you jump-start your car and it stops running right away, it could mean that the alternator isn’t working right. It’s important to see a mechanic about this so they can figure out what’s wrong. 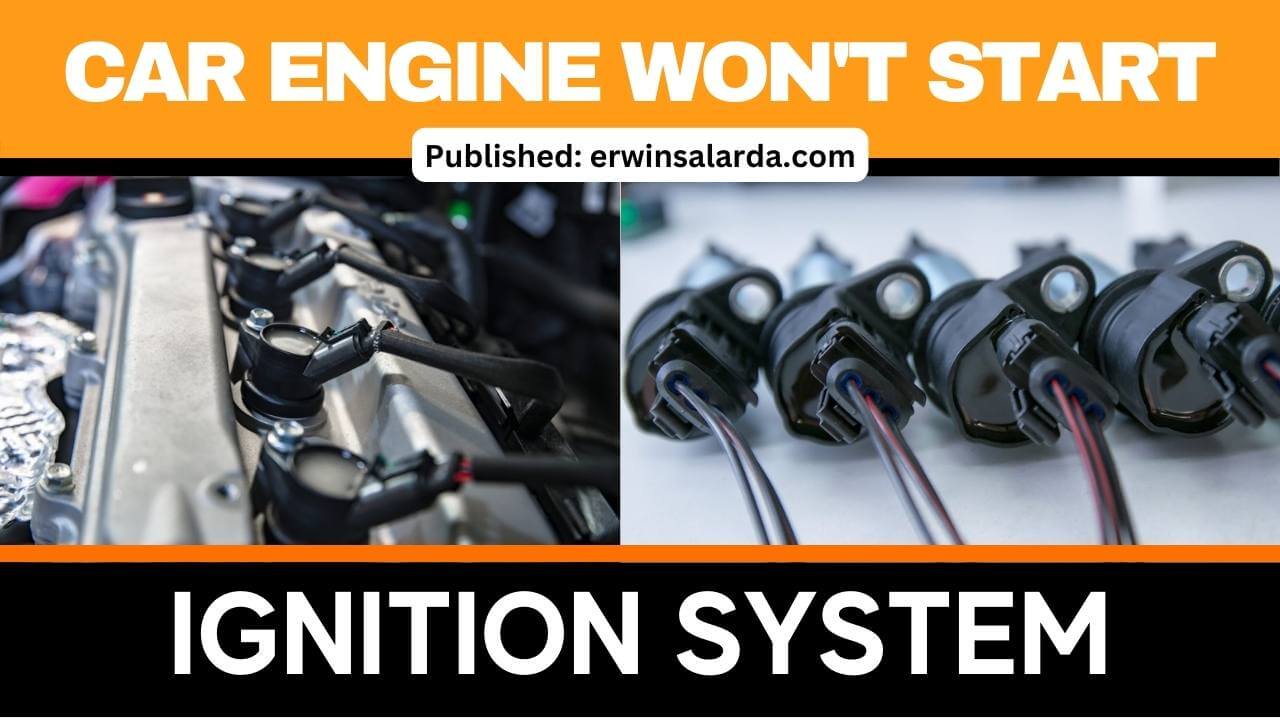 When your engine cranks but won’t start or run, it could mean that it’s having trouble producing a spark, getting fuel, or creating compression. The ignition system’s job in a gasoline engine is to ignite the air-fuel mixture. In addition to the spark plugs that spark in the combustion chambers, the ignition system includes an ignition coil, which converts battery voltage to a higher voltage, and the spark plug wires that connect these components.

The most common symptom of ignition trouble is a vehicle that won’t start. You may be able to start your vehicle’s engine, but it will be slow. It will be difficult to start the engine if the ignition coil fails to deliver the necessary voltage to the spark plugs. If your vehicle stalls when you stop or even stops completely, it could be due to a faulty ignition coil sending erratic sparks to the spark plugs. 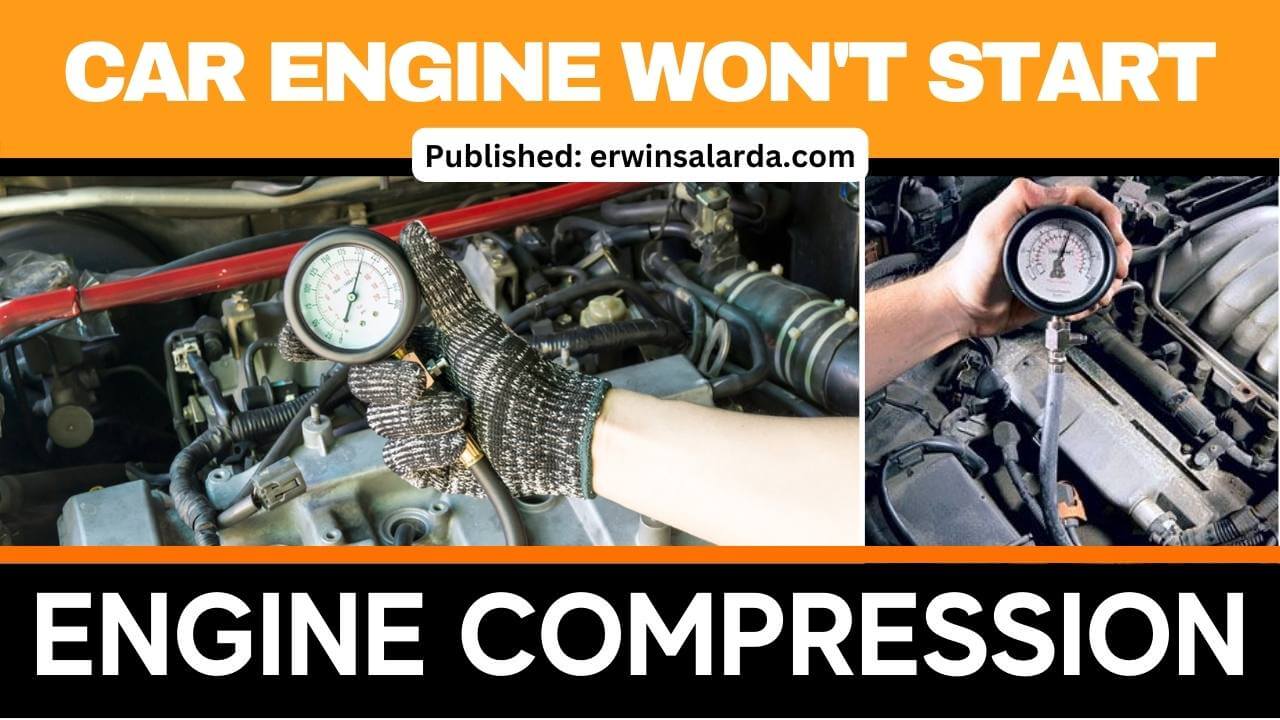 It’s easy to see how low compression could be problematic for a vehicle. If you have engine compression issues, your car will either misfire when you start the engine, perform poorly, or not start at all if you have low or no compression in all cylinders. 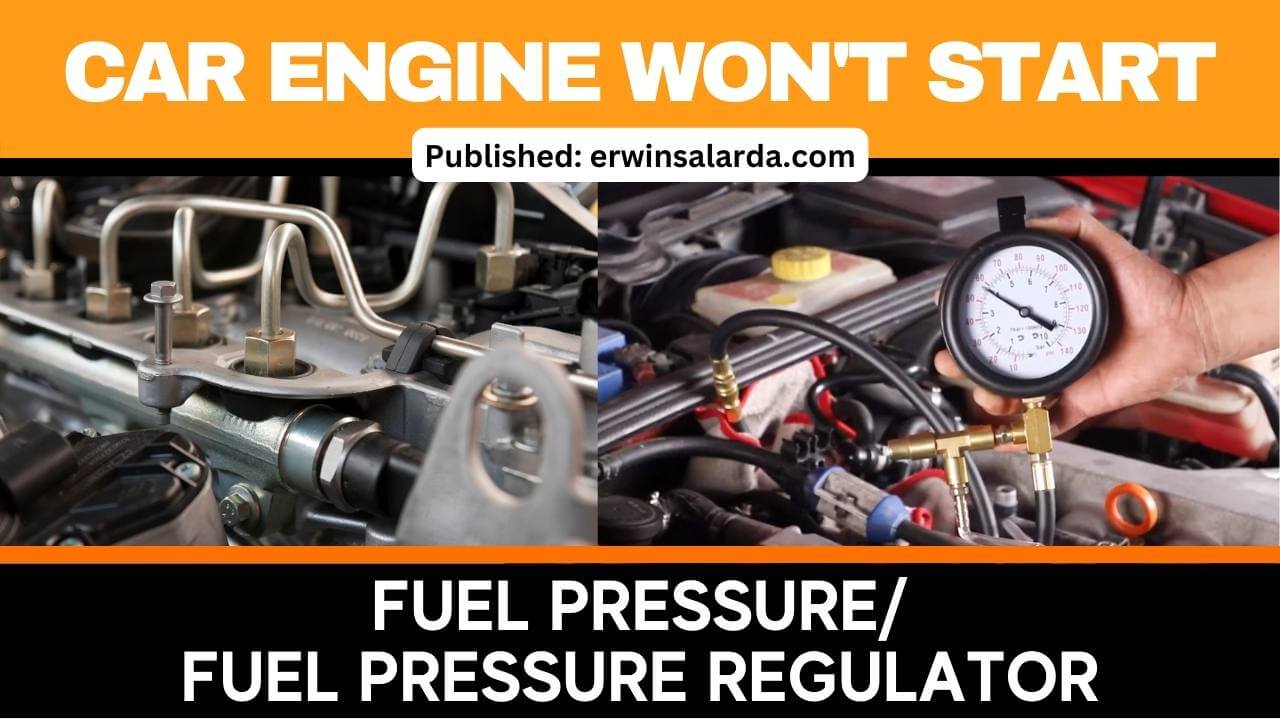 The presence of poor fuel economy, difficulty starting the engine, fuel in the vacuum lines, and engine misfires are all indicators that the fuel pressure regulator is not functioning properly. If your vehicle does not start every time you try, or if it is running roughly, the problem could be a faulty fuel pressure regulator. 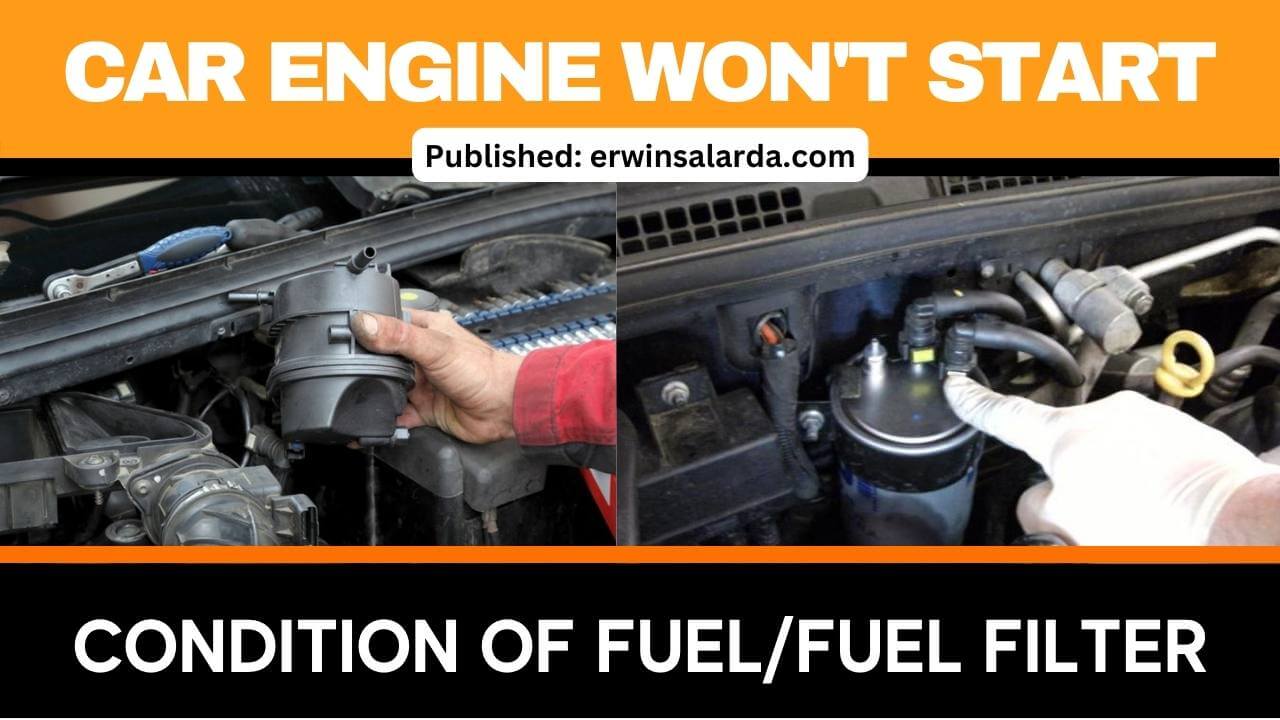 If the fuel filter is clogged and not replaced promptly, your car may not start at all. rough idle or misfire A clogged fuel filter may prevent the engine from receiving enough fuel.

The most common symptom of a clogged fuel filter is difficulty starting the car, as it depletes the oil supply to the engine. Although a dirty fuel filter causes ignition problems, a completely clogged filter will fail and the engine will not start. 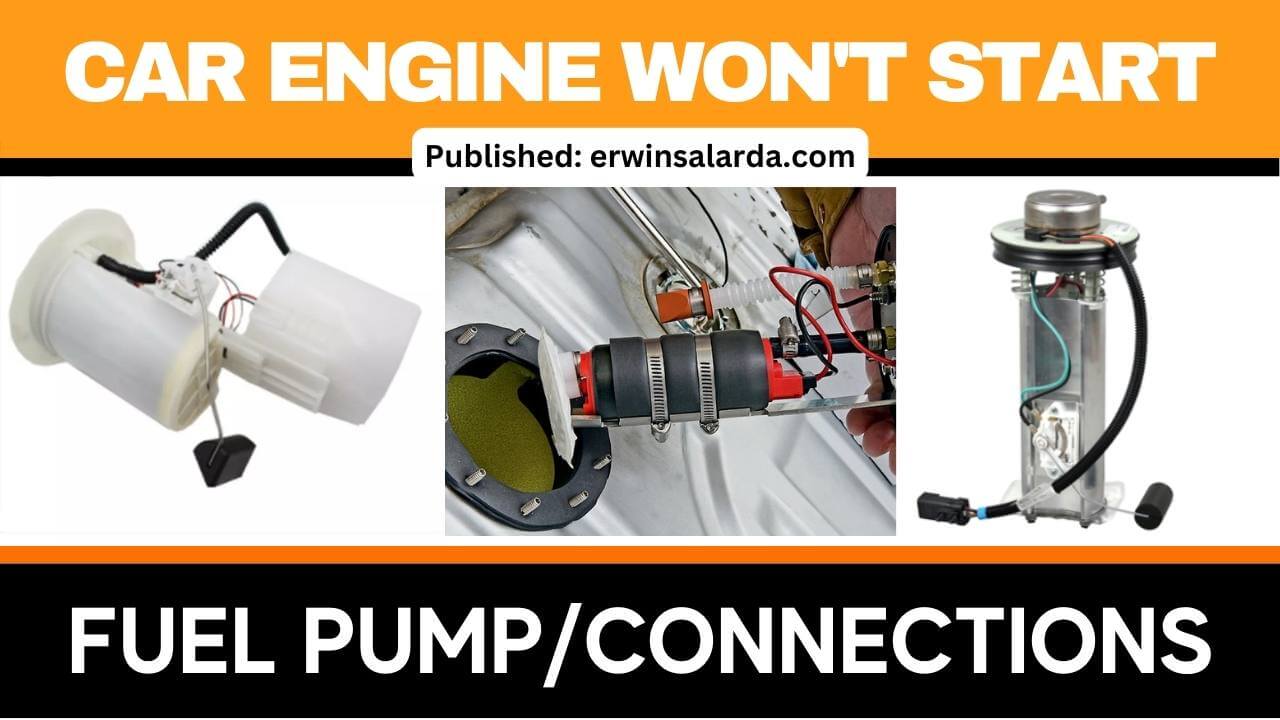 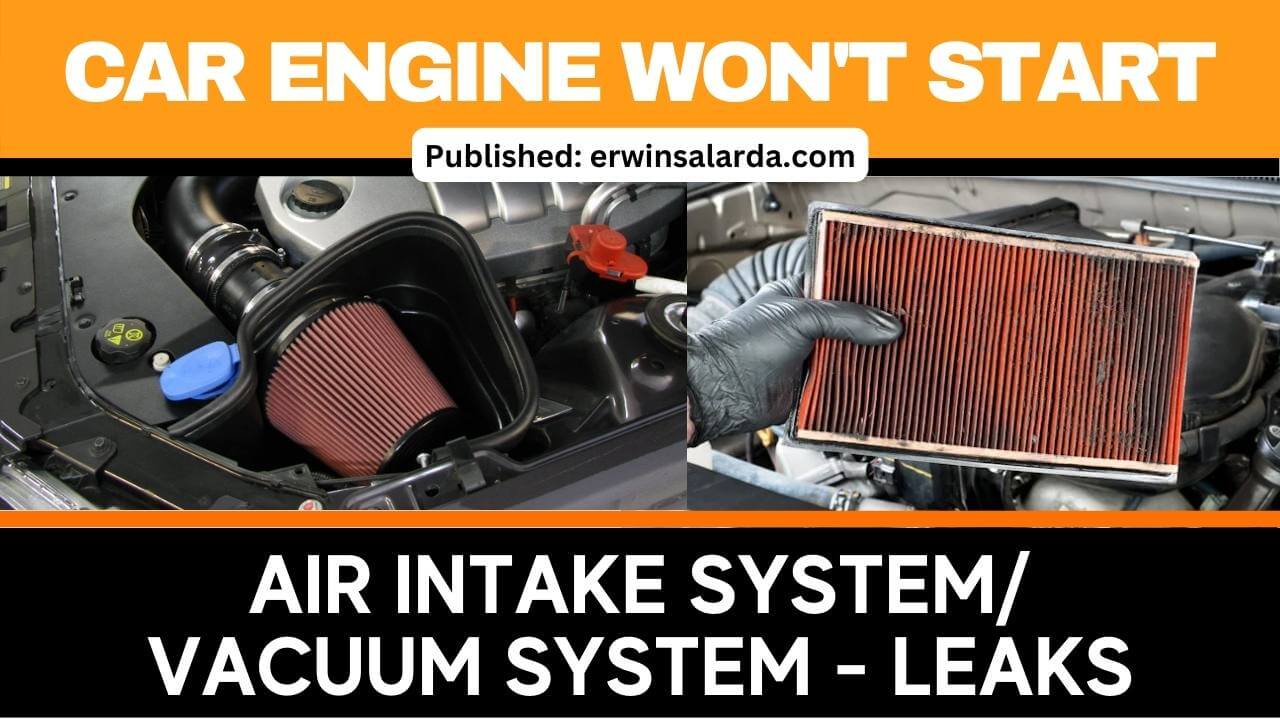 To function properly, your car’s engine requires a precise mixture of air and fuel. A vacuum leak allows unmetered air into the engine, causing the balance to be thrown off. Although the majority of vacuum leaks cause performance issues (such as rough running and stalling), a large enough leak can prevent the engine from starting at all.

The  air intake also makes use of an engine air filter, which, if clogged or dirty, can reduce power, acceleration, and fuel efficiency. In more severe cases, a dirty air filter may also cause problems starting the vehicle. 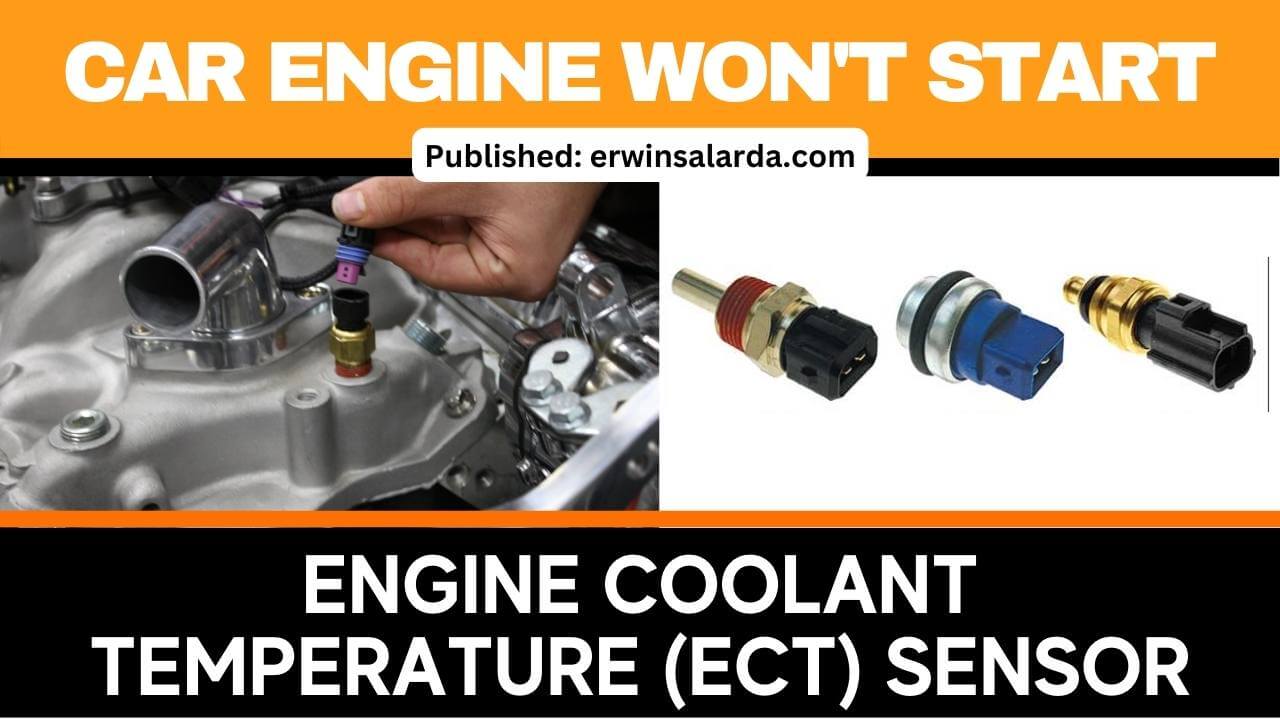 If you are having trouble starting your vehicle and the “check engine” light is not illuminated, it is possible that the engine coolant temperature sensor is broken (ECT).

The signal from the coolant temperature sensor tells the engine’s computer when to apply extra gasoline during a cold start. A faulty sensor can confuse the computer, keeping it from providing enough fuel. As a result, the engine may hesitate or stall. 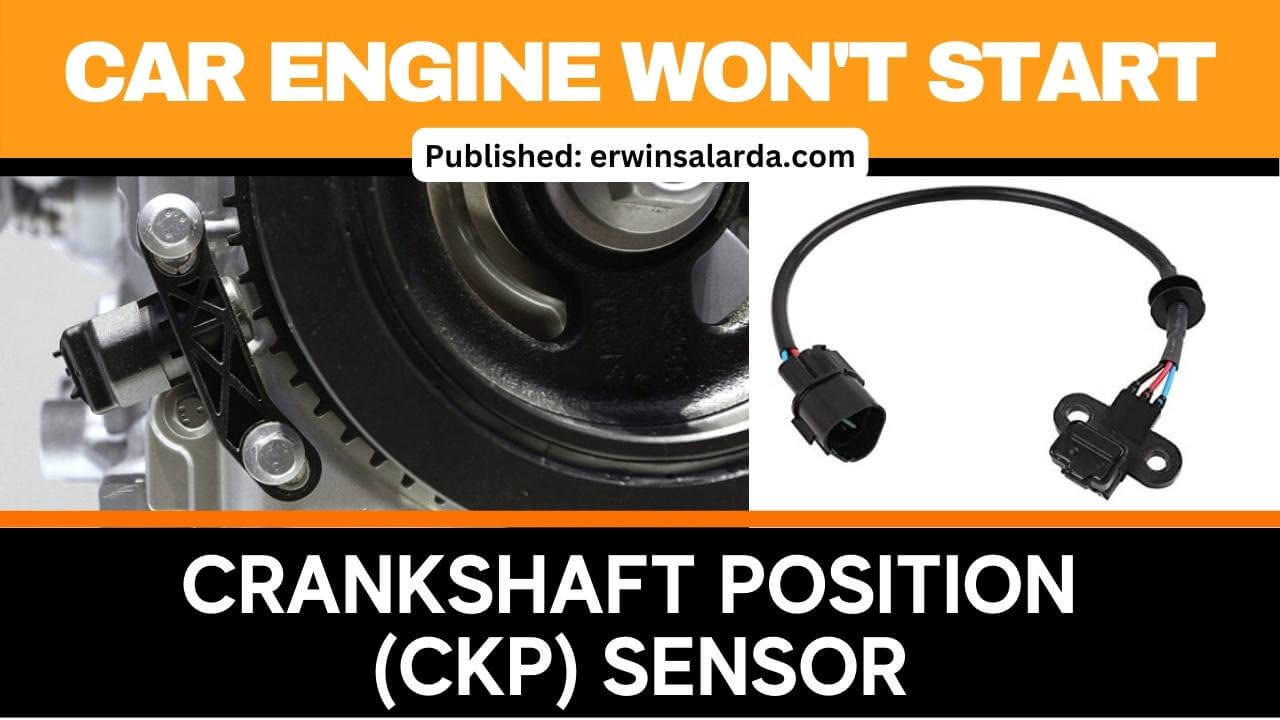 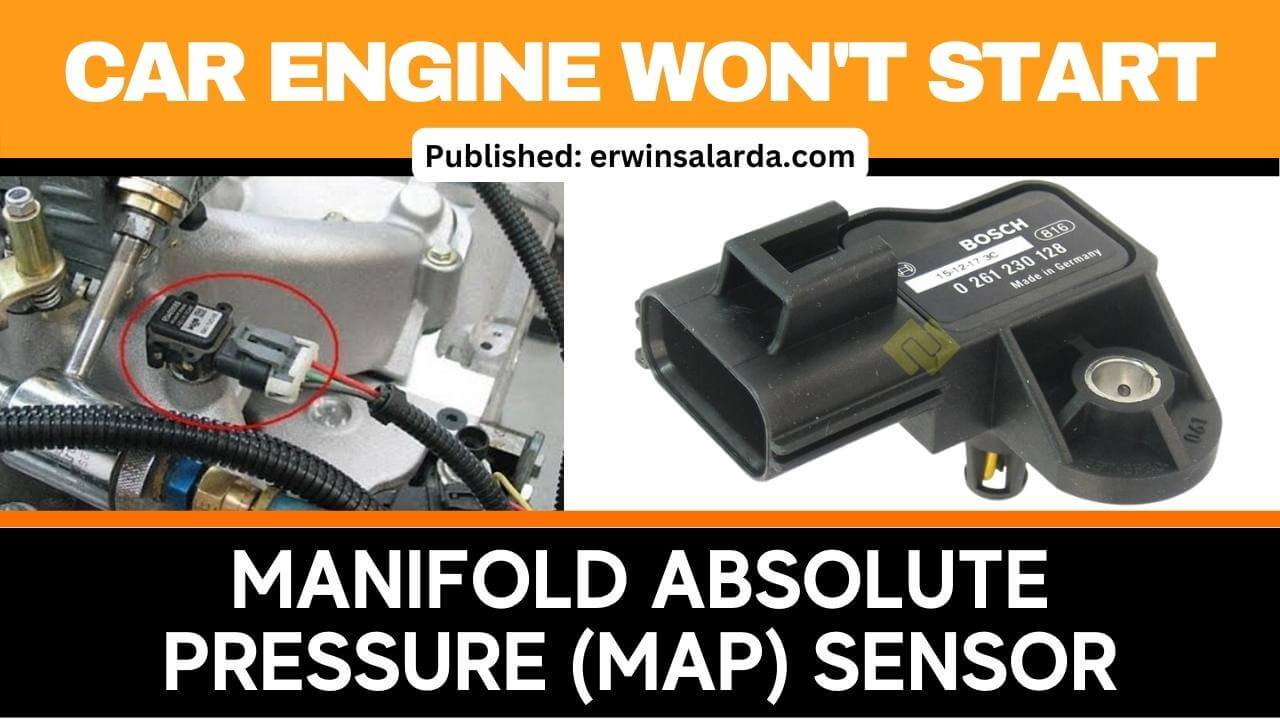 A faulty MAP sensor will affect the air-fuel ratio of an engine. If the ratio is incorrect, the engine will begin burning at the incorrect point in the combustion cycle. The manifold absolute pressure (MAP) sensor compares the barometric (atmospheric) pressure to the intake manifold vacuum in order to calculate the correct amount of fuel to inject into the cylinders. Therefore, a malfunctioning sensor can prevent the engine from starting. 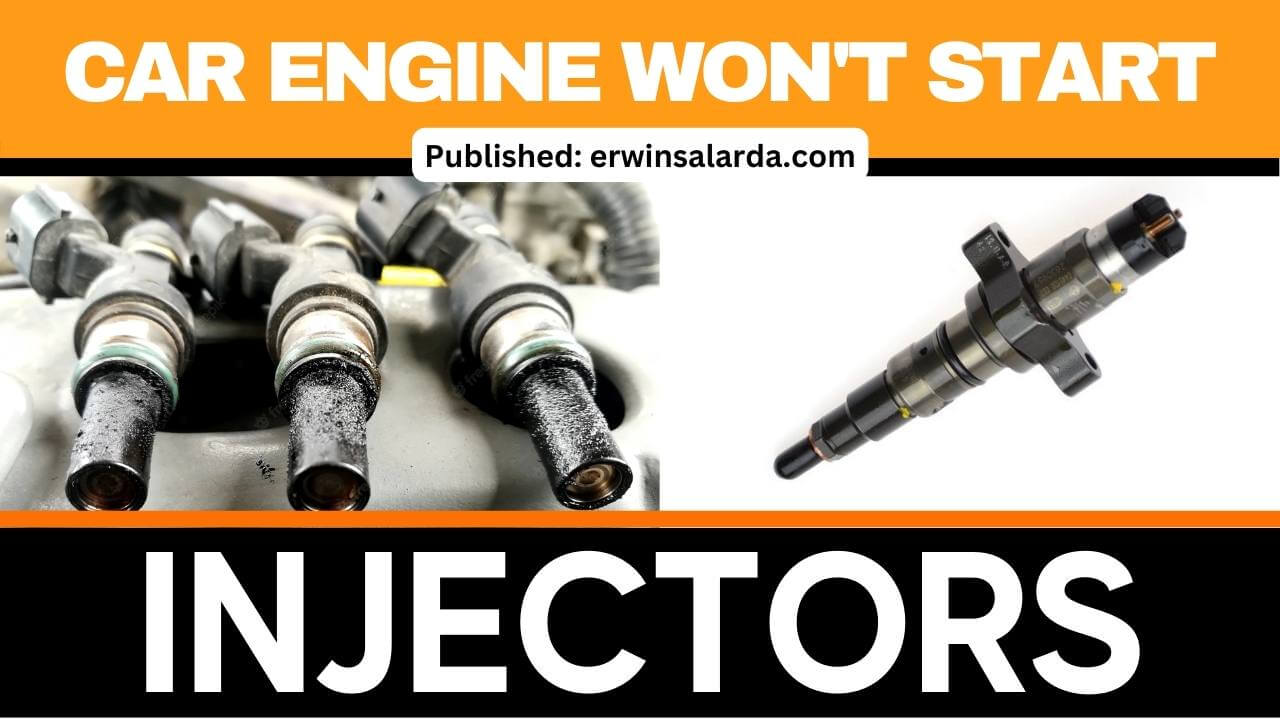 If you turn the key but the car doesn’t start, it could be because fuel isn’t getting to the engine. One reason for this could be that the fuel injectors are dirty. Over time, rust, corrosion, or dirt can get stuck in the fuel injector nozzles. 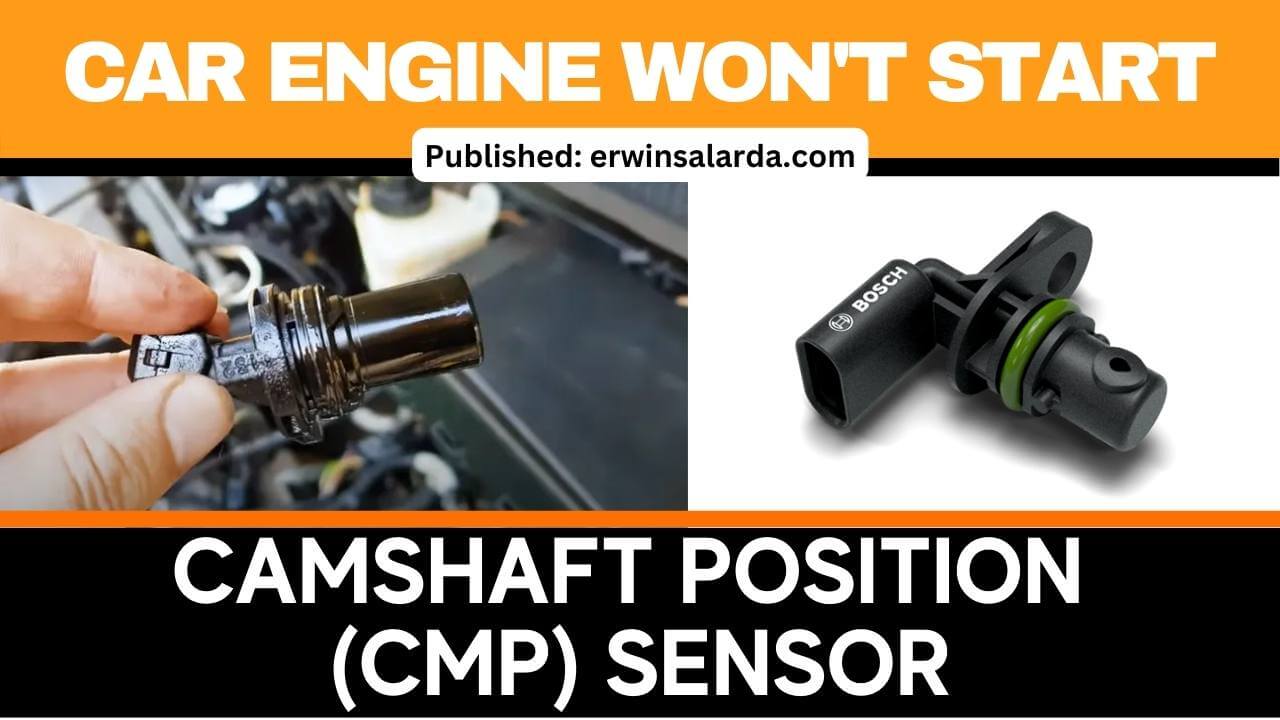 The electronic control unit (ECU) receives information about the phase of the engine cylinders from the camshaft position sensor (CMP). Because of this, the injection and ignition systems can be controlled with a greater degree of precision.

The failure of the camshaft position sensor over time causes the signal it sends to the engine control module to weaken, which results in the vehicle being unable to start. If the engine stops getting the signal, you won’t be able to start your car anymore. 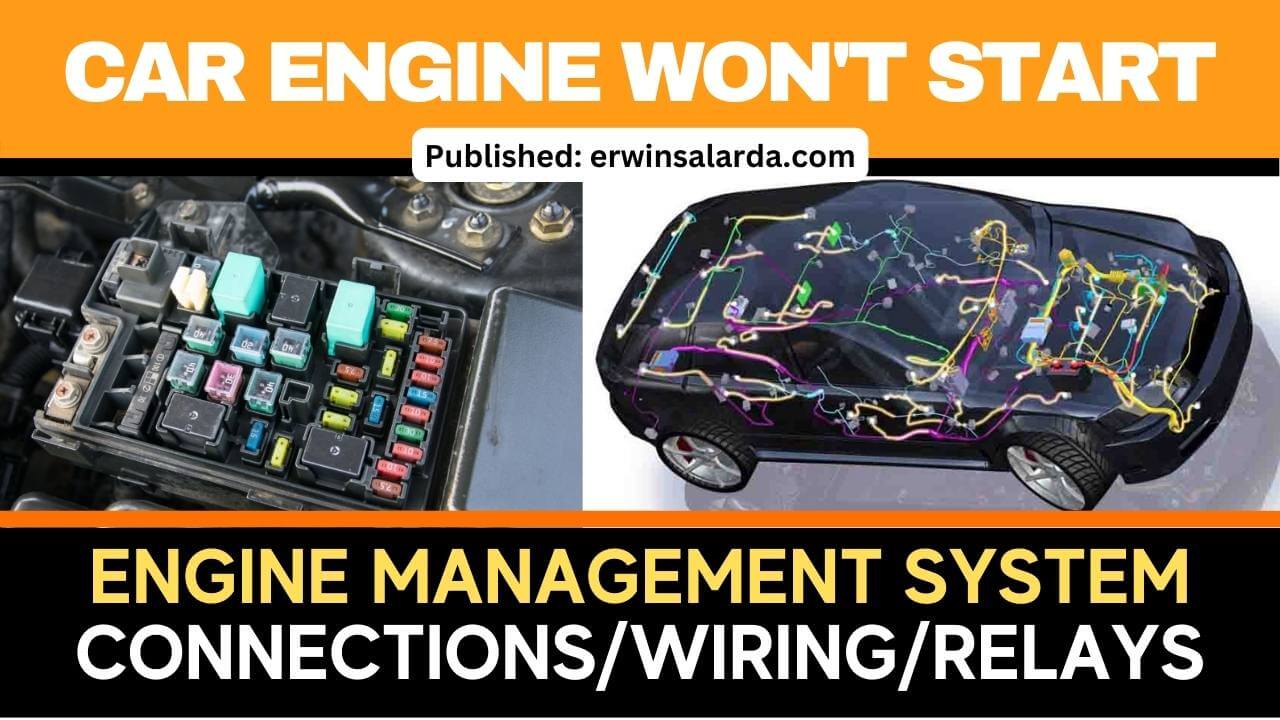 The vehicle will not start. A no-power condition is another sign of a faulty ignition relay. If the relay fails, it will cut power to the fuel pump and ignition system, resulting in no power and the car not starting.

electrical or wiring problems. All of the non-starting cars we saw had an electrical problem or a wiring issue. These included issues with the fuse box, with battery cables, or with the body control unit. 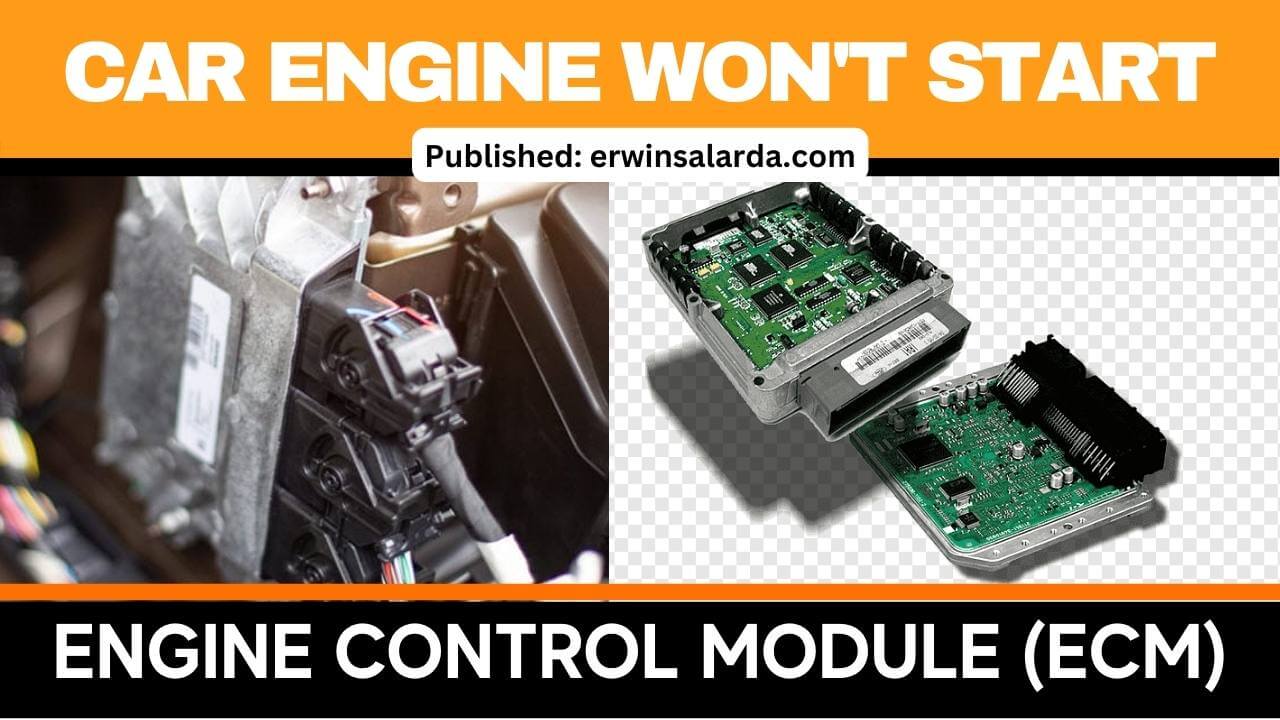 If the ECM malfunction is severe, the vehicle may not be able to start at all. A complete ECM failure means the vehicle has no engine management. As a result, the car cannot start because it lacks core inputs from the computer.

It takes time for me to compile and research this topic. I hope this simple guide will help you when your car won’t start.

Thank you very much! This tutorial was compiled and researched with LOVE by Erwin Salarda.