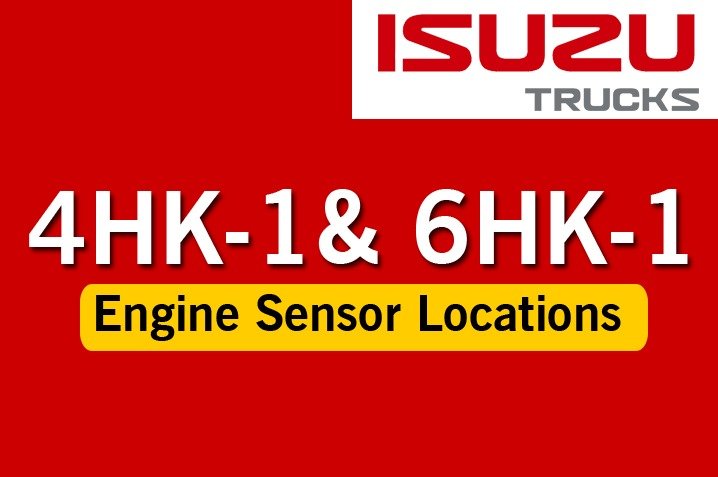 The 3 wire engine oil pressure sensor is located on the left side of the engine just below and forward of the high pressure injection pump.

The 2 wire crankshaft position sensor (CKP) is located on the flywheel housing at the left rear corner of the engine. The CKP sensor detects 45 projections equally spaced every 7.5° around the flywheel periphery. There is also a space (equal to 3 projections) to act as a top dead center (TDC) reference signal for the engine control module (ECM). With these 45 pulses and the TDC reference signal, the ECM calculates the engine speed and exact position of the crankshaft.

Note: Do not disassemble the EGR position sensor. If it is faulty, replace it as EGR valve assembly.

Do not replace the SCV. If it is faulty, replace it as supply pump ASM.

The 3 wire boost pressure sensor is located in the piping to the intake manifold of the engine. The sensor converts the boost pressure into the voltage signal and sends it to engine control module (ECM). The ECM should detect a higher signal voltage at a high boost pressure.

The injectors are controlled by the engine control module (ECM). The ECM sends a common power supply to injectors 1, 3 and 5. The ECM also sends a common power supply to injectors 2, 4 and 6. The ECM fires the injectors by controlling the ground of the individual injectors. The ECM calculates the basic injection amount and timing based on the signals from throttle position sensor, boost pressure sensor, crankshaft (CKP) sensor, camshaft (CMP) sensor, etc. The timing of the injection is controlled by when the injector activates. The fuel quantity delivered is based upon the amount of time that the injector is open and also the pressure supplied by the common rail. To improve combustion in cylinders, the system injects a little fuel (pre- injection or pilot injection) and ignites it at the beginning of the cycle. A second injection (main injection) delivers the fuel required deliver the horsepower needed.

The glow control relay system consists of the ECM, glow relay, glow plug. When the key switch is turned ON with low engine coolant temperatures, the ECM determines the glow time and operates the glow relay (K2). After a certain time has elapsed, the ECM will turn the glow relay to “OFF”. Also, after-glow function allows to stabilize idling immediately after starting.