We are an authorized dealer of Launch X431 Scanner in the Philippines. We have the top-of-the-line Launch X431 OBD Diagnostic Scanner for Cars and trucks. 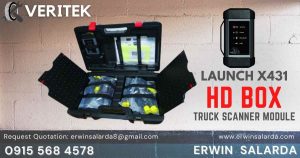 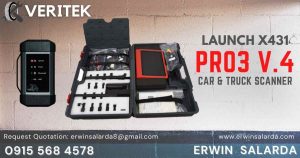 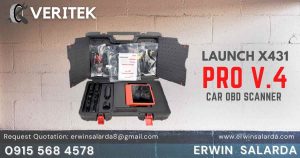 On-board diagnostics (OBD) is an automotive term referring to a vehicle’s self-diagnostic and reporting capability. OBD systems give the vehicle owner or repair technician access to the status of the various vehicle sub-systems. The amount of diagnostic information available via OBD has varied widely since its introduction in the early 1980s versions of on-board vehicle computers. Early versions of OBD would simply illuminate a malfunction indicator light or “idiot light” if a problem was detected but would not provide any information as to the nature of the problem. Modern OBD implementations use a standardized digital communications port to provide real-time data in addition to a standardized series of diagnostic trouble codes, or DTCs, which allow a person to rapidly identify and remedy malfunctions within the vehicle.

HISTORY OF ON BOARD DIAGNOSTIC

The regulatory intent of OBD-I was to encourage auto manufacturers to design reliable emission control systems that remain effective for the vehicle’s “useful life”.[citation needed] The hope was that by forcing annual emissions testing for California,[citation needed] and denying registration to vehicles that did not pass, drivers would tend to purchase vehicles that would more reliably pass the test. OBD-I was largely unsuccessful,[citation needed] as the means of reporting emissions-specific diagnostic information was not standardized. Technical difficulties with obtaining standardized and reliable emissions information from all vehicles led to an inability to implement the annual testing program effectively.[citation needed]

The Diagnostic Trouble Codes (DTC’s) of OBD-I vehicles can usually be found without an expensive ‘scan tool’. Each manufacturer used their own Diagnostic Link Connector (DLC), DLC location, DTC definitions, and procedure to read the DTC’s from the vehicle. DTC’s from OBD-I cars are often read through the blinking patterns of the ‘Check Engine Light’ (CEL) or ‘Service Engine Soon’ (SES) light. By connecting certain pins of the diagnostic connector, the ‘Check Engine’ light will blink out a two-digit number that corresponds to a specific error condition. The DTC’s of some OBD-I cars are interpreted in different ways, however. Cadillac (gasoline) fuel-injected vehicles are equipped with actual on-board diagnostics, providing trouble codes, actuator tests and sensor data through the new digital Electronic Climate Control display.

Holding down ‘Off’ and ‘Warmer’ for several seconds activates the diagnostic mode without the need for an external scan tool. Some Honda engine computers are equipped with LEDs that light up in a specific pattern to indicate the DTC. General Motors, some 1989-1995 Ford vehicles (DCL), and some 1989-1995 Toyota/Lexus vehicles have a live sensor data stream available; however, many other OBD-I equipped vehicles do not. OBD-I vehicles have fewer DTC’s available than for OBD-II equipped vehicles.

OBD-II is an improvement over OBD-I in both capability and standardization. The OBD-II standard specifies the type of diagnostic connector and its pinout, the electrical signalling protocols available, and the messaging format. It also provides a candidate list of vehicle parameters to monitor along with how to encode the data for each. There is a pin in the connector that provides power for the scan tool from the vehicle battery, which eliminates the need to connect a scan tool to a power source separately. However, some technicians might still connect the scan tool to an auxiliary power source to protect data in the unusual event that a vehicle experiences a loss of electrical power due to a malfunction. Finally, the OBD-II standard provides an extensible list of DTCs. As a result of this standardization, a single device can query the on-board computer(s) in any vehicle. This OBD-II came in two models OBD-IIA and OBD-IIB. OBD-II standardization was prompted by emissions requirements, and though only emission-related codes and data are required to be transmitted through it, most manufacturers have made the OBD-II Data Link Connector the only one in the vehicle through which all systems are diagnosed and programmed. OBD-II Diagnostic Trouble Codes are 4-digit, preceded by a letter: P for engine and transmission (powertrain), B for body, C for chassis, and U for network.