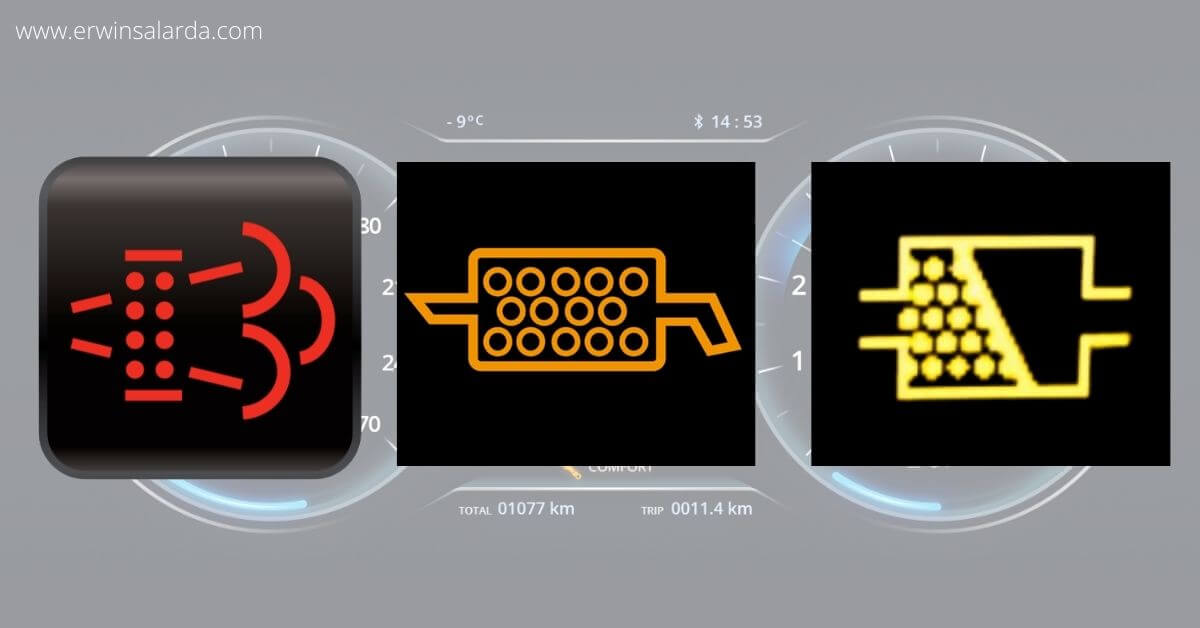 DPF Light (Diesel): This indicates that the diesel exhaust particulate filter has failed its test and must be serviced or repaired. When the DPF light illuminates, it indicates that there is a problem with your vehicle’s diesel particulate filter (DPF). This is something that has been installed in diesel vehicles since 2009 in order to decrease the quantity of soot discharged via the vehicle’s exhaust system, thus reducing emissions. This soot is toxic and has the potential to cause respiratory issues in people.

However, despite the fact that having one of these filters in your car’s exhaust helps to substantially decrease the quantity of soot emerging from your exhaust, it has the potential to get clogged, resulting in the DPF warning light on your dashboard being lit.

What is the root reason of the DPF being clogged?

Passive regeneration is initiated when the accumulation of soot reaches a particular threshold, which is controlled by the engine control unit of the vehicle. As more gasoline is fed into the engine, the temperature of the exhaust system rises as a result of the increased combustion. This causes the soot to burn, converting it into fine ash, which is then expelled via the exhaust.

This procedure is often carried out by your vehicle when traveling at greater speeds, since it is necessary to maintain a high temperature in the exhaust system.

However, if you spend the most of your time making short excursions around town and seldom traveling at highway speeds, your vehicle will be unable to complete this regeneration process. As a result, the soot continues to accumulate in the diesel particulate filter (DPF), ultimately resulting in the illumination of the diesel particulate filter light.

What should you do if your vehicle’s DPF light comes on?

When the DPF light illuminates, it is informing you that the ‘passive regeneration’ process has failed and that you must actively regenerate the diesel particulate filter.

Increasing your speed to more than 40mph over a period of 10 to 15 minutes can accomplish this. Ideally, this will enable the exhaust to reach temperatures high enough to burn the soot and clean the filter.

It is possible that you may notice things like your engine producing an odd noise, a somewhat pungent smell coming from the exhaust, and an increase in your fuel usage while the regeneration is taking place. It is expected that everything will return to normal once the active regeneration process has been finished. You should also see that the DPF light has been turned off.

If you are unable to sustain a speed of more than 40mph for an extended period of time in order to enable the regeneration process to finish, soot will continue to accumulate in your filter and your DPF warning light will stay on until the issue is corrected.

Is it possible to ignore the DPF light and continue driving?

Although it is technically possible, we do not encourage it. Continue driving despite the DPF indicator on your dashboard and the soot will soon accumulate to the point where your vehicle will have to enter ‘limp-home” mode in order to avoid any harm from occurring to its engine.

This will almost certainly result in the illumination of further warning lights, urging you to take your vehicle to a nearby shop for diagnostics.

Performing a forced DPF regeneration should be simple enough for your garage to handle. This should clean the filter and enable it to operate correctly once again. While this method works in most cases, it is not always effective, particularly if the filter has been broken or if the engine has suffered other damage. More severe repairs, depending on the extent of the damage and the car, may cost thousands of dollars.

Is it possible to prevent DPF problems?

Only by having a vehicle that meets your requirements. If you travel long distances, such as commuting to work, a diesel vehicle equipped with a particle filter might be appropriate for you. Regularly reaching the speeds needed to conduct both passive and active regenerations would reduce the chance of experiencing any issues with the diesel particulate filter (DPF).

If, on the other hand, you only make short trips, a diesel vehicle may not be the best choice for you. If you just use your vehicle to go to the grocery store or to transport children to and from school, a petrol engine is more appropriate for you. If you drove a diesel with a DPF, you would seldom allow it the chance to clean its DPF, which would result in you seeing the DPF light more often than you would like.

The following are the possible causes of the Diesel Particulate Filter – DPF light:

In order for the pollutants in the diesel particulate filter to be burned, the exhaust must reach a specific temperature before it can be expelled. In the event that your engine is subjected to low stress for an extended period of time, the exhaust will be unable to clean itself, resulting in the DPF indicator being on.

This is often remedied by driving at greater loads / speeds on open highways, forcing your exhaust to heat up to higher temperatures. Driving for an extended period of time with low exhaust temperatures, on the other hand, may cause your engine to enter limp mode, resulting in considerable power loss until the diesel particle filter is cleaned or changed by a qualified technician.

Sensors that are not working properly

In certain cases, a professional technician may be required to clean the diesel particulate filter. This occurs when the system gets clogged to the point that it is unable to clean itself. Your diesel particulate filter (DPF) light will illuminate if your DPF system needs to be cleaned. This will usually be done by your technician using a professional grade scan instrument to activate the DPF system for cleaning. Afterwards, the technician will most likely need to run the diesel vehicle, ute, or van through a certain driving cycle in order to thoroughly clear out the diesel particle filter.

The diesel particulate filter is dirty and has to be cleaned.

In certain cases, a professional technician may be required to clean the diesel particulate filter in your vehicle. This occurs when the system gets clogged to the point that it is unable to clean itself. Your diesel particulate filter (DPF) light will illuminate if your DPF system needs to be cleaned. This will usually be done by your technician using a professional grade scan instrument to activate the DPF system for cleaning. Afterwards, the technician will most likely need to run the diesel vehicle, ute, or van through a certain driving cycle in order to thoroughly clear out the diesel particle filter.

High-speed routes that do not need stopping, such as dual carriageways and motorways, are the best places for DPF filter cleaning to take place. To begin the process of DPF regeneration, follow the steps outlined below: