The fifth generation 3 Series was produced in the sedan, wagon, coupé and cabriolet body styles. Due to the separate model codes for each body style, the term “E9X” is sometimes used to describe this generation of the 3 Series.

In 2006, the 335i became the first 3 Series model to be sold with a turbocharged petrol engine. The E90 also saw the introduction of run-flat tires to the 3 Series range. Consequently, cars with run-flats are not equipped with a spare tire.

The Flat Tire Monitor monitors tire pressures while the car is being driven. The system reports any significant loss of pressure in one tire in relation to another.

If a tire loses pressure, its rolling radius changes, and this in turn alters the speed of rotation. This change is detected and is reported as a flat tire.

In order to assure the reliable reporting of a flat tire, the system must be initialized for the correct tire inflation pressure.

The system must be reinitialized each time a tire inflation pressure has been corrected or a wheel or tire has been changed.

The Flat Tire Monitor is unable to warn the driver of sudden, severe tire damage caused by external factors, nor can it identify the gradual loss of pressure that will inevitably occur in all four tires over a lengthy period of time.

In the following situations, the system could be delayed or malfunction:

Indication of a flat tire

iDrive integrates the functions of a large number of switches. This allows these functions to be operated from a single central position. The following section provides an introduction to basic menu navigation.

The control of the indi-vidual functions is described in connection with the relevant equipment. 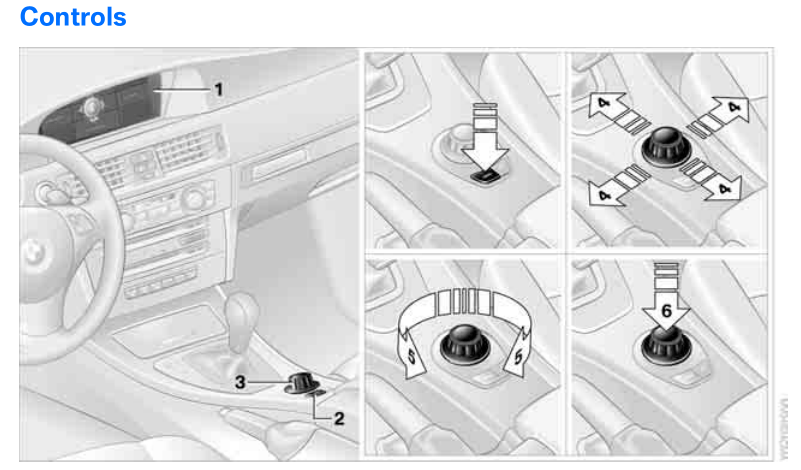 The controller can be used to select menu items and to adjust settings: